The app works on the basis of a publication by Carl Friedrich Gauß and is the only known method that delivers a mathematically exact result. In contrast to other methods, the own location does not have to be estimated beforehand.
The app is only suitable for navigation with the sun. A change in location between the observations can be recorded with an integrated dead reckoning module.
In order that the recorded data can be used for the calculation of the position, the precise altitude difference method by Cornelis Douwes was used into the calculations.
Despite high mathematical precision, location accuracy is primarily determined by the ability of the navigator to use the sextant and clock measuring devices.

TEST MODE: By selecting the test mode, any constellations can be examined. A location is calculated when the data entered is valid. Only the Specify function is available in the Dead Reckoning module. A running navigation is not interrupted by the test mode. Both can be used in parallel. 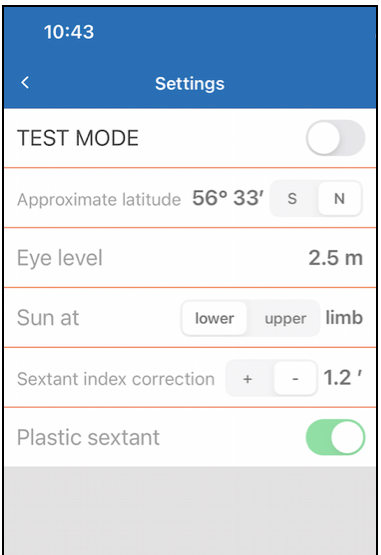 Approximate latitude: Tap on the number and enter your guessed latitude with the wheels. Note that two overlapping circles of position intersect in two places. An entered latitude north of the declination leads to the calculation of the northern intersection. An entered latitude south of the declination leads to the calculation of the southern intersection.
Eye level: Enter the vertical distance between your sextant's telescope and the waterline. In the case of high waves, end your observation on the top of a wave crest if possible.  Sun at: Specify here whether you want to put the sun on the horizon line with the top or bottom limb.
Sextant index correction: Tap on the number and enter the required index correction for your sextant. Choose "-" if the index error is positive and select "+" if the index error is negative.
Plastic sextant: Activate these switch if you use a plastic sextant. With these, the index error is more temperature-dependent. It is then possible to carry out the index error correction for each observation directly in the Observations menu. A positive error is corrected by a negative entry and vice versa. The index error must be determined immediately before or after an observation.

Date entry: The date of the first observation cannot be changed (exception in test mode).

Time: Enter the exact second of completion of observing the sun. If Noon Latitude is selected, the time is entered to the minute.

Sextant reading: Enter the altitude of the sun read on the Arc and micrometer-drum of the sextant.

Active: Activate your inputs by turning the switch to green. After that, changes are only possible by completely re-entering all data. If data is active under Circle of Position 2, then it can be transferred.

By activating the data, the circle of position is displayed in green on the 3D globe. The app automatically switches to the Dead Reckoning menu to record the upcoming change of location until the second observation.

Date entry: The date cannot be changed (exception in test mode).
Time: Enter the exact second of completion of observing the sun. If Noon Latitude is selected, the time is entered to the minute.  Sextant reading: Enter the elevation angle read on the Arc and micrometer-drum of the sextant.

Active: Activate your inputs by turning the switch to green. You can perform and activate as many second observations as you like, for example every hour or as required. A second observation is also possible on the following days. The larger changes in location over days lead to location deviations if dead reckoning is not carried out exactly.  Result: After each activation, the ship's location is calculated according to the entered data and displayed as last position. The DR position is displayed by adding or subtracting the longitudes and latitudes crossed as a result of a change in location and is recalculated after every minute. The way in which a change of location should be considered must be set in the Dead Reckoning menu. Dead reckoning is only stopped after deactivating Circle of Position 1.

Note: The settings for a second observation can only be changed after the active switch in the observation menu is set to gray. This could be necessary, for example, if the lower edge of the sun is covered by clouds and the observation has to be switched to the upper edge.

Reckoning: Select this function if you want to carry out a precise calculation of the change in location between the observations. This type of calculation is not available in test mode.
Specify: Select this function if you want to manually enter the distance and the driven course between the first observation to a second observation.  Add new leg: After a sustainable change in speed, after a course change, after a tack or jibe, the data for speed and/ or course are entered and confirmed with use the data. They can still be corrected afterwards. Tapping ADD adds a new leg to a log board.
Log board: Each intended entry in the Reckoning mode creates a new line in the Log board. From the sum of all entries, a sailing vector consisting of an course mad good and an distance mad good is calculated. This sailing vector is used for the location calculation after every second observation. The log board is deleted when the first observation is deactivated.

Note: The data for a ocean current are only mathematically taken into account as long as they are currently entered and displayed. Their values can be changed at any time, but do not constitute a new line in the log board. The data is acquired from the current ocean current radar on the Internet. If you don't have internet on board, you can call a friend and get the data by phone.

Graphic: The first circle of position is shown as a green circle on the display. If the ship changes its position, this circle will be larger (or smaller) because the old position of the sun at the time of the first observation is then observed from another location.
After changing the position, the circle of position of the first observation is shown in a green dashed line. 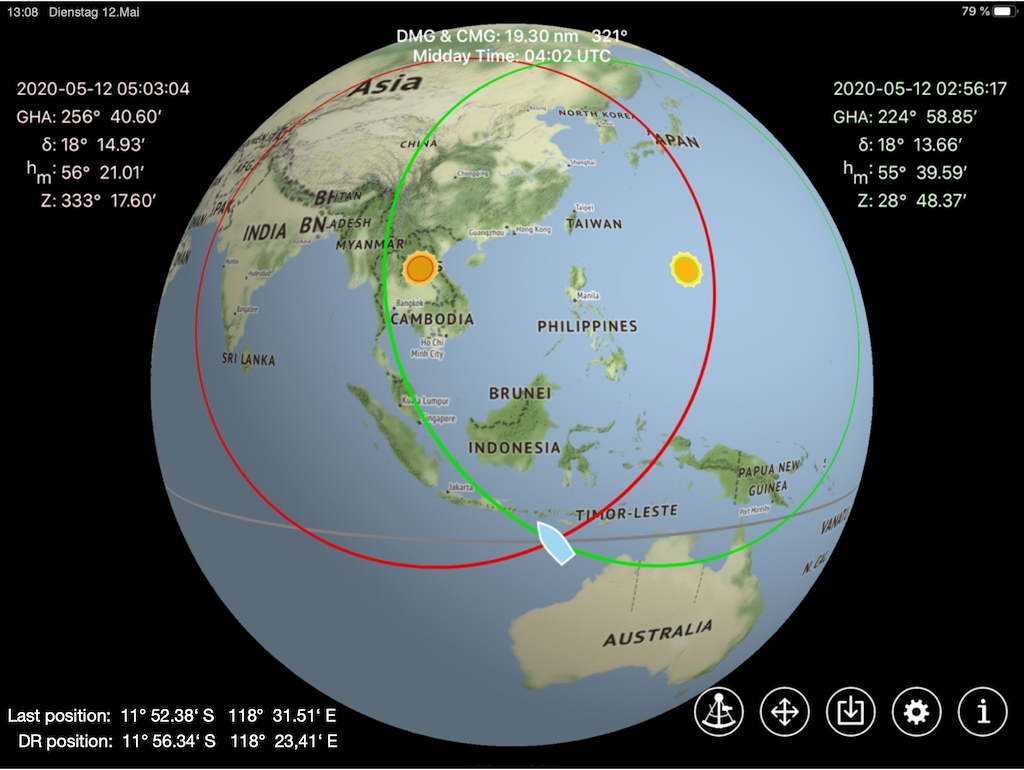 The circle of position 2 is shown as a red circle. Possible locations are the intersections between the green and red circle. Whether the northern or southern intersection should be right as the location is selected by entering a aproximate latitude in the settings.
Changes in location are only visible from a certain zoom level as a blue line from the starting point to the location. A further change in the location of the sailing route is shown as a blue dashed line.

Data output: On top in the middle of the display the sailed distance made good and course made good are output and updated every minute.
In the line below the ships midday time is displayed. This time is only available after a second observation.
Nautical information on each observation is output at the top right and left.
At the bottom left, the ship position at the time at the last observation is shown with Last position and DR position at the current time.

The map base used is not a nautical chart, but a normal 3D world map with very high resolution. Only a base map is loaded during the installation of the app. Maps with a higher resolution for the area of sailing you want must be downloaded manually. There are two ways to do this, which can be done in online mode:

It is possible to download maps worldwide up to very high resolutions. Under certain circumstances, there may be problems. Either the download hangs or the app crashes, which always has no negative consequences. The only cause of this is map areas that are too large. If one of these things happens, the map area to be downloaded must be selected smaller. Before doing so, delete the suspended map or restart the app if it has crashed.

You can only download a small part of a sailing area at a time, which is then surrounded by a frame. Optionally, the frames can be hidden. As a rule, several maps must be downloaded for a sailing area, which are then numbered consecutively:

The position information refers to the centre of the top edge of the map.
Start by zooming in on the beginning of the sailing area you want to sail so that the display width of your device spans about 100 nm to 200 nm.

The following pictures show an example of the process when the sailing area is in the Mediterranean. A first map is downloaded. 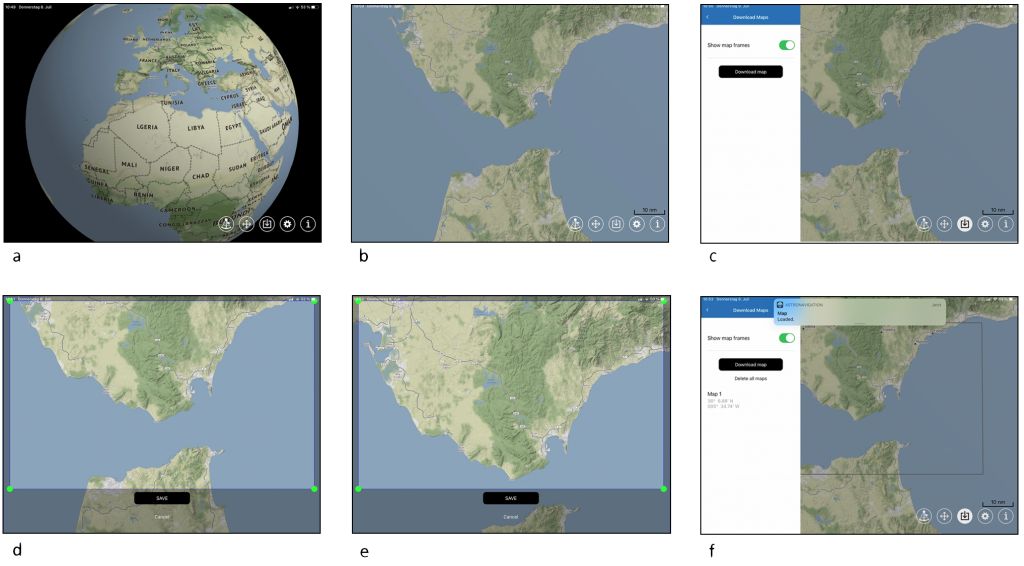 a) the globe view
b) zooming in from the beginning of the sailing area, here Gibraltar
c) after pressing the "map"-button the map menu opens up
d) a download window with four green handles appears
e) moving the map downwards, because only the north coast is of interest
f) after pressing "save" the map is loaded and framed

When the first map has been downloaded, the "Download map" button is pressed again. The neighbouring map section is now dragged into the selection window with the finger and "safe" is pressed. This map section is then loaded. This is repeated until the sailing area, consisting of many maps, is completely downloaded.

a) the neighbouring map part is moved into the selection window and is downloaded
b) size and shape of the selection window can be changed
c) Sometimes it is even possible to download larger map areas, but this is quite unstable because the map base often causes problems

If the download of a selected map area takes too long, it is better to stop the download and select two smaller areas instead of one that is too large.

If the app does not even start the download, but terminates immediately when "safe" is pressed, this does not cause any further problems. This is also caused by the map base, because too large an area is to be downloaded at once. The app must be restarted and the area to be downloaded must be zoomed in even more. Unfortunately, it is not possible to guess beforehand whether the content or the size of a selected area may cause problems. If only small areas are downloaded at a time, there are no problems, but you have to load a lot of maps.

The content of this URL is navigating at sea with the app “Circle of Position Navigation”. Celestial navigation is the only alternative to satellite navigation and has a special meanings as a backup system. Some people also practice celestial navigation as a hobby. However, only very few are able to work on board with formulas that are difficult to understand, volumes of books and tables and extensive drawing work. With this app, anyone can find their position at sea without having to calculate or draw. In addition to the app, a sextant and a watch are required.